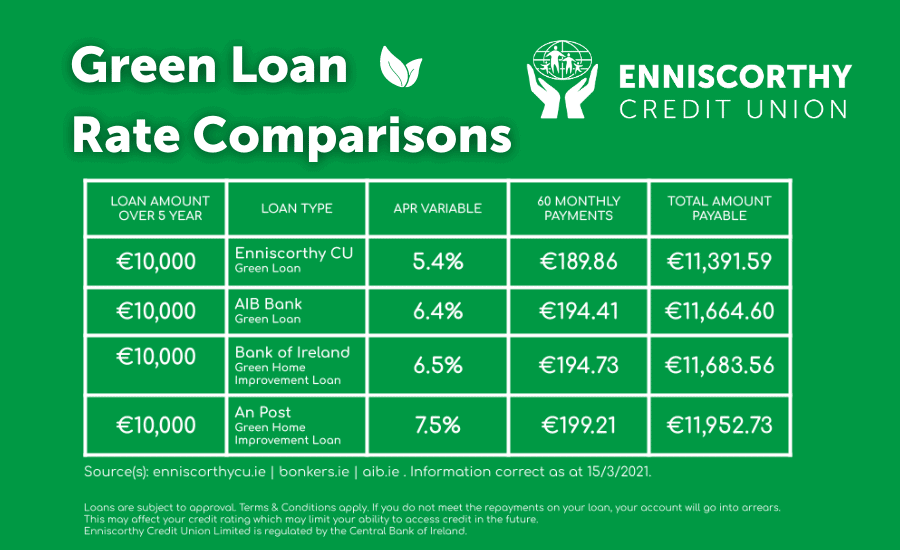 We were thrilled to have been mentioned in an article about Green loan rates in The Sunday Times on March 21, 2021, in the Money section.  The article was written by Eithne Dunne, and compared the many “green” loans available now.  In her in-depth analysis, we were thrilled to be mentioned with regards to Credit Union offerings and Electric Cars too.

Our green loan has been available now since early 2020 and we have seen an increase in interest and uptake.   Our fantastic rate can be used for home improvements and/or a hybrid or electric car.  Our low rate for our green loan, was in response to the publicity that Enniscorthy was getting in 2019, as having one of the worst air qualities in Ireland.  Air pollution in Enniscorthy was almost ten times the EU safety levels.  In the first two months of 2019, levels in the town were measured at 200 while the EU standard is 25. EPA surveys had shown that in certain Irish towns, like Enniscorthy and Gorey, air quality could be at the same levels as Beijing, Bombay, and other major third world capital cities.  By offering a low rate Green loan we offer an affordable way for our members to make their homes energy efficient.

A lot of homes in our common bond were built before 2006 and the national push is now on to retrofit those homes by 2030.  Many are suitable for grants to increase their energy Efficiency through the SEAI, check out their website here for more info.  However the grants do not cover the full amount of the work, that is where we come in, offering a flexible, affordable loan to cover the work.

According to the article “Rates for green home improvements vary from credit union to credit union, but Enniscorthy Credit Union, for example, is offering an APR of 5.4 per cent on its green loans, putting it up there with the most competitive rates on the market.”

“Some green lenders offer preferential rates for those buying electric or plug-in hybrid vehicles. For example, Enniscorthy Credit Union offers the same rate for electric cars as it does for green home improvements.”

Our Loan comparison attached illustrates Green loan rates one of the points of the article that on a loan for €10,000 over 5 years – credit union offering a rate such as 5.4 per cent, that will be the best deal with a total cost of credit of €1,392.

For anyone thinking of a project in the near future, talk to us first, check out our Green Loan rates on our website, call us on 053 9233835 or email loans@enniscorthycu.ie. 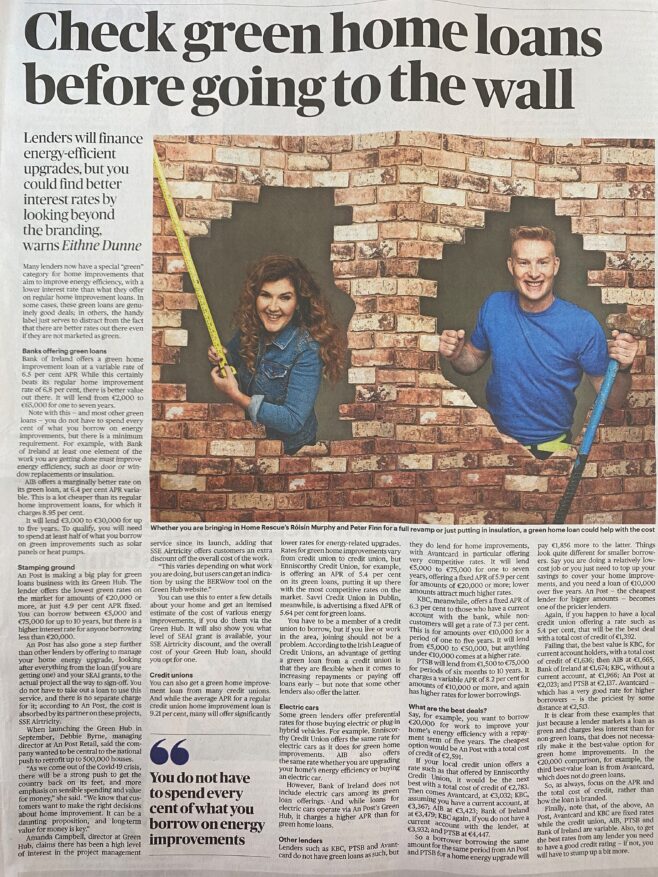 This website uses cookies to improve your experience while you navigate through the website. Out of these cookies, the cookies that are categorized as necessary are stored on your browser as they are as essential for the working of basic functionalities of the website. We also use third-party cookies that help us analyze and understand how you use this website. These cookies will be stored in your browser only with your consent. You also have the option to opt-out of these cookies. But opting out of some of these cookies may have an effect on your browsing experience. For more information please see our Cookie and Privacy Statement.
Necessary Always Enabled
Necessary cookies are absolutely essential for the website to function properly. This category only includes cookies that ensures basic functionalities and security features of the website. These cookies do not store any personal information.
Analytics
Analytical cookies are used to understand how visitors interact with the website. These cookies help provide information on metrics the number of visitors, bounce rate, traffic source, etc.
Advertisement
Advertisement cookies are used to provide visitors with relevant ads and marketing campaigns. These cookies track visitors across websites and collect information to provide customized ads.
Performance
Performance cookies are used to understand and analyze the key performance indexes of the website which helps in delivering a better user experience for the visitors.
Save & Accept