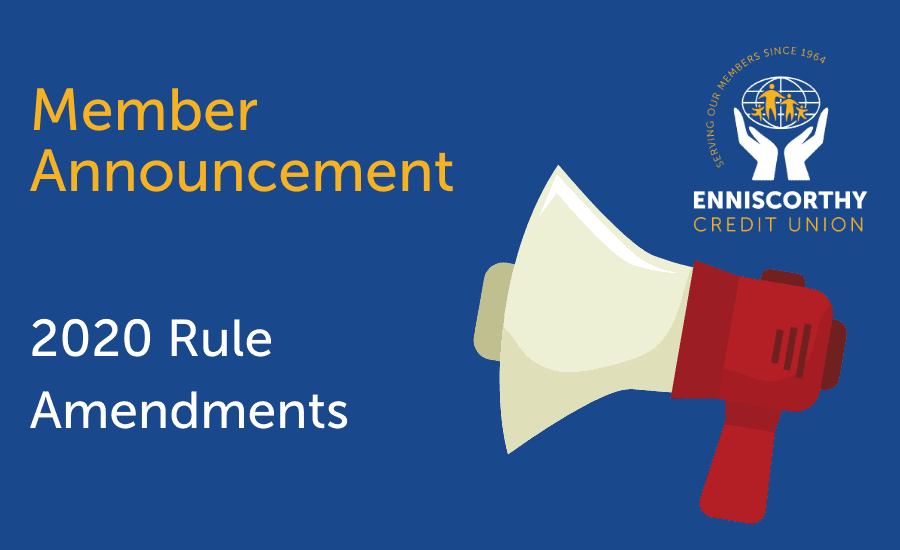 At the 2020 Annual General Meeting of Enniscorthy Credit Union Ltd held virtually on 20th April 2021, amendments to Enniscorthy Credit Unions Standard Rules were approved by a two-thirds majority of members present and voting at that meeting. These amendments related to Rule 1, Rule 96, Rule 98 and Rule 99, all of which incorporated changes to allow for virtual AGMs. A change to Rule 13 was also approved by our members relating to our membership fee.

These two amendments are not the substantive rule amendments to allow for virtual meetings and as such they will not prevent Enniscorthy Credit Union holding virtual general meetings in the future.  They will be brought back to the members at the 2021 AGM and, if approved, they can then be re-submitted to the Registry of Credit Unions.

All of the remaining rule amendments were approved by the Registry of Credit Unions.

The purpose of this correspondence is to ensure full transparency with our members and to inform you that despite the members resolution to amend Rule 98(2)(c) and Rule 99(3)(a), it was ultimately excluded from Enniscorthy Credit Unions registration request to the Central Bank at this time.

A copy of Enniscorthy Credit Unions standard rules can be found on our website here.

This website uses cookies to improve your experience while you navigate through the website. Out of these cookies, the cookies that are categorized as necessary are stored on your browser as they are as essential for the working of basic functionalities of the website. We also use third-party cookies that help us analyze and understand how you use this website. These cookies will be stored in your browser only with your consent. You also have the option to opt-out of these cookies. But opting out of some of these cookies may have an effect on your browsing experience. For more information please see our Cookie and Privacy Statement.
Necessary Always Enabled
Necessary cookies are absolutely essential for the website to function properly. This category only includes cookies that ensures basic functionalities and security features of the website. These cookies do not store any personal information.
Analytics
Analytical cookies are used to understand how visitors interact with the website. These cookies help provide information on metrics the number of visitors, bounce rate, traffic source, etc.
Advertisement
Advertisement cookies are used to provide visitors with relevant ads and marketing campaigns. These cookies track visitors across websites and collect information to provide customized ads.
Performance
Performance cookies are used to understand and analyze the key performance indexes of the website which helps in delivering a better user experience for the visitors.
Save & Accept